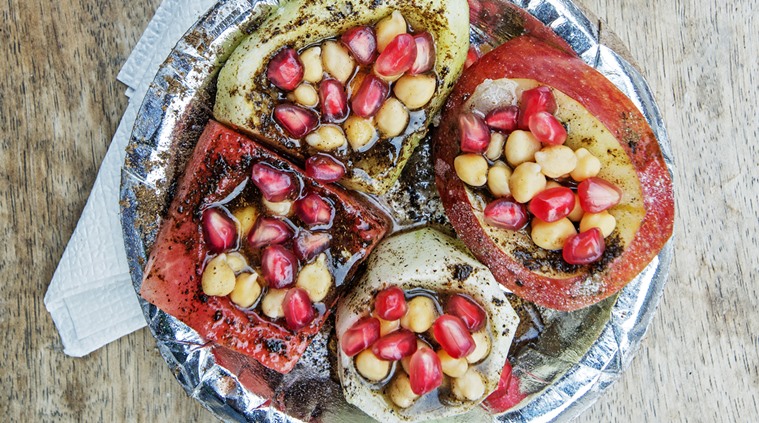 With the rich, lengthy and enigmatic history that accompanies it, it’s undeniable that Kulle is quintessentially Delhi. Photograph by Sushant Sinha

Cups of cucumber, watermelon or pineapple — topped with jewel-like pomegranate seeds — can be very alluring in the Delhi sun. They may resemble appetisers out of the menu at present-day fusion restaurants, but are actually found only in the by-lanes of Old Delhi. At first glance, they do seem contemporary and minimalist, but kulle are as old as the only two places that sell them — more than a hundred years.

The origin of these colourful and juicy snacks remains hazy. It’s clear, however, that they were conceived by old-school chaatwallas in Chawri Bazaar and Chandni Chowk. Both Hira Lal Chaat Corner and Sultan Kulle Waale – the two hole-in-the-wall places that specialise in them — claim credit for the recipe, despite the latter’s name implying a stronger possession.

Hira Lal Chaat Corner’s present manager, Brij Lal, speaks enthusiastically of his great grandfather who went to Jaipur and sampled a raj kachori, which inspired the kulle. The theme of filling a shell with spiced chickpeas carried forward; the sweetened yogurt, sprouts, and sev were left behind. Brij Lal says, with unmistakable conviction, that his family was the first to have ever made them, but switches to a dispirited tone as the conversation moves to Sultan Kulle Waale. He asserts — with part disappointment and part indifference — that Sultan picked the idea up later.

Ingredients differ slightly at both stalls. Hira Lal uses a wider variety of seasonal fruit for the cups — including orange and mango — while Sultan chooses from the usual cucumber, watermelon, banana, tomato and sometimes pineapple. Potato and sweet potato are staples all year round. The chickpea filling and pomegranate garnish also remain consistent, with the masala that’s sprinkled on top being each family’s own well-kept secret.

Arun Kashyap, Sri Sultan Singh Kullewala’s great grandson, proudly reveals that Chandni Chowk old timers of the “Mathur community” were their primary customers when the shop had first opened. Esteem is attached to family name, in true Dilli-style. Kashyap also speaks of the family under whose house the shop is located — a family of the “Jain community”, that finds the identity of its home inseparably tied to Sultan Kulle. It’s a mutually satisfying relationship based on family honour and the old Delhi culture of being united with one’s neighbours.

Now better known as catering businesses run by the fourth generation of descendants, these shops required up to ten members of the family — fathers, brothers and uncles — to man them in their heyday. Back then, queues were commonplace and air-conditioned restaurants serving chaat were non-existent. Although crowds may have dwindled over the years — and notwithstanding the arrival of Haldiram’s, Evergreen and Nathu’s — those who know and love kulle identify them with Hira Lal and Sultan. No modern chaat shops in Delhi serve them, or even hint at their existence. Kulle make a brief appearance as snacks at weddings or fairs now and then, but the Purani Dilli connoisseurs produce even the majority of those.

Despite being easy to prepare and to eat, why these bright cups are hard to find elsewhere remains a mystery. It’s surely not the case that they fall outside the expertise of those who have mastered chhole bhature and gol gappas. They do, however, fall outside the category of most Delhi chaat that either makes it compulsory for the chaat to be served hot, or to use frying as part of the process. But with the rich, lengthy and enigmatic history that accompanies them, it’s undeniable that they are quintessentially Delhi.