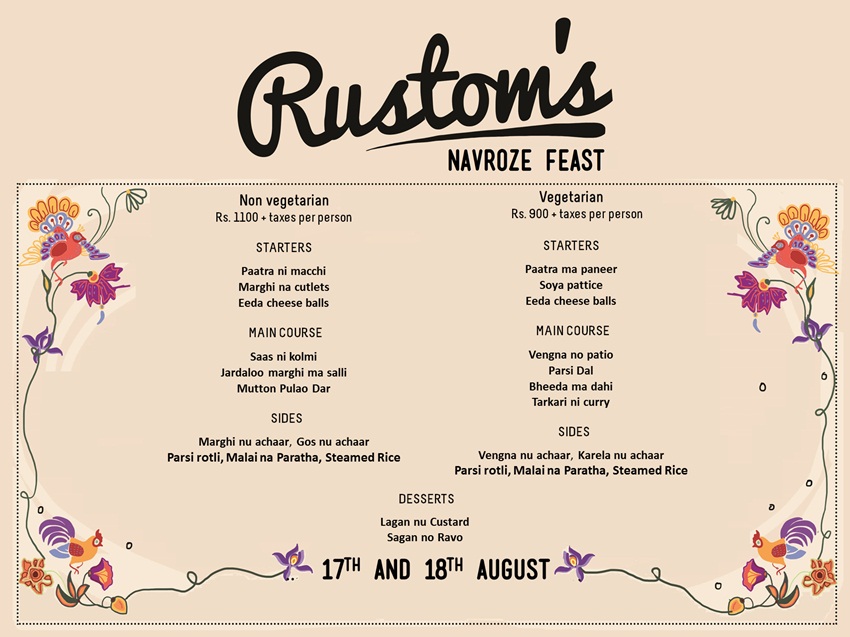 Given our love for all kinds of pickles, the first thing we noticed on the festive Navroze menu at Delhi-based Parsi restaurant, Rustom’s Parsi Bhonu, were the sides. They included Vengna nu achaar and Karela nu achaar. Vengna nu achaar is baby aubergines pickled in a sweet, sour and spicy tomato and coconut-based gravy. “Best had with parsi dal and rice,” says Rustom’s Parsi Bhonu chef and partner Kainaz Contractor, “We started serving the meat (chicken, mutton and prawn) pickles about six months back when we launched the summer menu. Now we have added the veggie (karela, aubergine and tendli) pickles all of which are sweet, sour and spicy.”

The special Navroze menu includes all the classics. One of the main course dishes on the non-vegetarian menu is Jardaloo margi ma salli, a decadent version of the chicken gravy served with fried potato straws or Salli Murghi. “It’s my grandmother’s recipe,” says Contractor, “I add dried apricots or jardaloos, which give the dish a Persian touch and a nice sweet addition to the midly-spiced dish.”  There’s also Saas ni kolmi, another Parsi favourite, which is traditionally served with pomfret, but will be served with prawns at Rustom’s. “It has maida, eggs, sugar, cumin and vinegar, kind of like a Parsi bechamel.”

Both the vegetarian (Rs 900, exclusive of taxes) and non-vegetarian (Rs 1100, exclusive of taxes) menus include three starters, three main course dishes (vegetarian has four), sides that include pickles, malai na paratha, steamed rice and two desserts. The Navroze feast will be served for both lunch (between 12.30 and 3 pm) and dinner (between 7.30 and 11 pm) at Rustom’s. There’s clearly no such thing as too many new year holidays or too much food in the Parsi scheme of things.