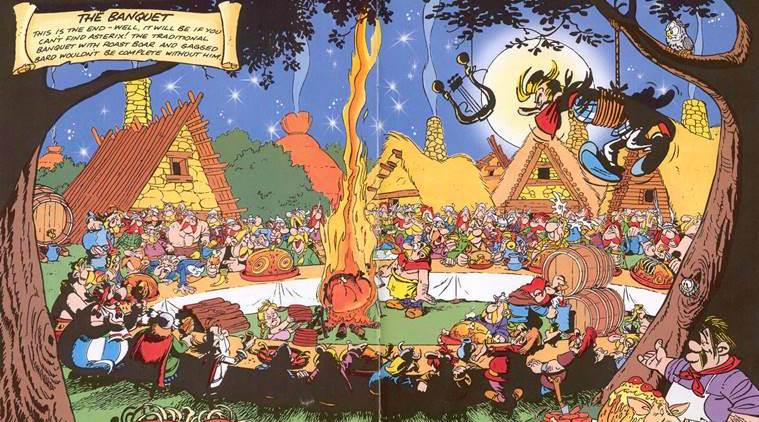 One of the most memorable images of Asterix is the final feast on the last page: Whatever adventures our indomitable Gaulish duo may encounter, whatever strange lands they journey to, they always return to the village to hog out on wild boar.

Despite all their strife, the Gauls and the Romans were united in their love for roast boar. “Aper ita conditur”, boar is cooked like this, goes the ancient cookbook Apicius, named after the famous gourmand of the ancient age, Marius Gavinus Apicius. As historian Patrick Faas explains, “for this you would need a very large oven, or a very small boar”.

As children, our first introduction to food different from what we eat in our homes probably came from comic books (and neighbours, too, unless of course you were an unfriendly kid). Those colourful, thought-bubble-peppered pages spoke of a world — and I’m assuming that you are of a certain vintage here — in which men, including our heroes, eat strange-looking, strange-sounding and, probably, strange-smelling things. The Phantom, Tarzan, Mandrake, and Flash Gordon all had food-related run-ins. So did Tintin. In King Ottokar’s Sceptre, we see him follow a suspicious character to the Klow restaurant, which specialises in Syldavian cuisine. The intrepid reporter is forced to order something and goes for a “Szlaszeck with mushrooms” and washes it down with a glass of “szprodj”. 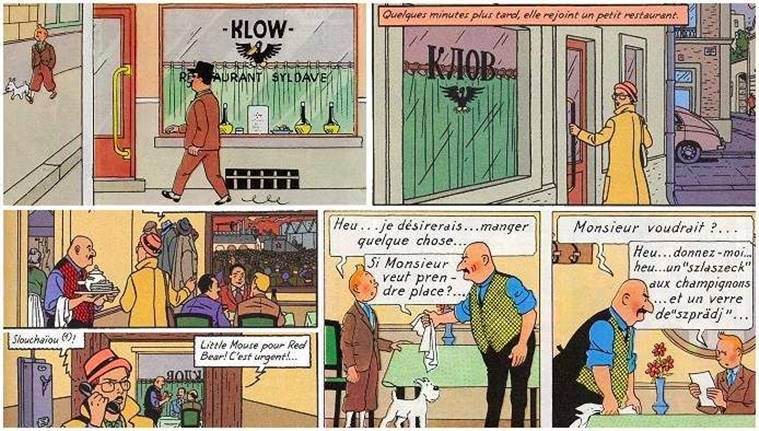 Photograph source: Pinterest.com
The main dish seems to be derived from the Polish szaszlyk, which in turn comes from the shish kebab. Consistent with its location in the Balkans, Syldavian cuisine shows Slavic and Turkish influences. When Tintin asks for the recipe, he is informed that it’s the “hind leg of a young dog in heavy Syldavian sauce” but this is probably the owner trying to wind him up. In any event that proves to be a foolish decision as Snowy does a thorough wrecking job in the kitchen, devouring sausages and blini – but does get a bad case of the hiccups. We are not told what szprodj is but can speculate it is a form of kvass, a popular fermented beverage made from bread. 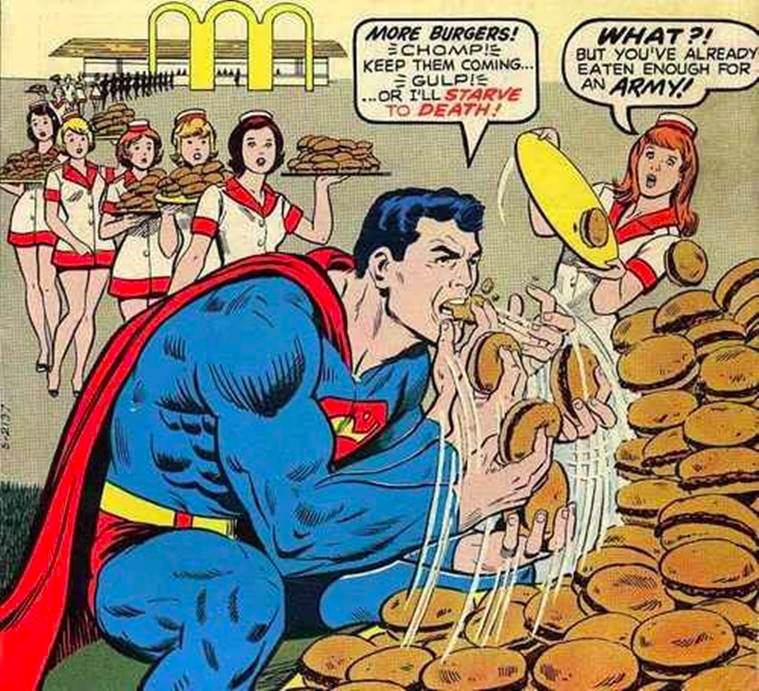 Photograph source: gamefaqs.com
Across the Atlantic, the most famous comic book character of them all doesn’t even need food. We don’t know much about what passed for culinary high culture in Krypton. On earth, the Man of Steel gets all his sustenance from the warm yellow light of our sun. He doesn’t really need to eat food, except to keep up appearances. It was only till they got to #454 in the Action Comics series did the writers examine this issue. “Superman’s Energy Crisis” sees the last son of Krypton up to some erratic behaviour, including being defeated by minor villains and falling asleep on the job as Clark Kent. Some mumbo-jumbo about stolen solar energy merely sets up the premise – Supes is dangerously low on charge and needs to eat his way out of this problem. He naturally picks McDonald’s and goes berserk on the burgers. Sample some of the dialogue: “More Burgers! Chomp! Keep them coming…Gulp! Or I’ll starve to death”. The cover with a ravenous Man of Steel and a long line of waitresses is a cult favourite. Interestingly inside the DC universe, there is a chain of diners called Big Belly Burger, which is naturally a subsidiary of LexCorp.
Speaking of burgers, for most Indians the first encounter with them was probably dished out by Pop Tate’s at the Chocklit. Bob Montana, the creator of Archie, based the shoppe on Crown Confectionary and its Greek owner from his home town of Haverhill in Massachusetts. Called “soda shops”, they were a familiar part of the American landscape in the 1930s.

The other great American institution is the diner. Keen-eyed readers would have spotted the “Gunga Diner” chain in Alan Moore and Dave Gibbon’s Watchmen. In a deliriously detailed imagining , Moore posits that a super-famine breaks out in south India in the 1970s, and an Indian who flees to the US starts the diner chain which serves Indian food. Tandoori supplants McDonald’s. In a droll play of words, the name comes from Kipling’s “Gunga Din” (you are a better man than I am!) poem. The chain’s elephant logo – and its floating elephant-shaped ballon, much like the Goodyear blimp — is ubiquitous in that alternate New York. Later, America gets into a strategic alliance with the Soviet Union. This is reflected in a rival chain called “Burgers N Borscht” that challenges the status quo.

While this takes place in the background, food is brought to the centre-stage in Chew, a series around an agent who is a food psychic. Writer John Layman plunges us into a world of food-based paranormal powers. These range from Lubodeipnosophistes (ability to seduce anyone they dine with) to Mnemcibarian (ability to cook meals that one can never forget). What would be useful for a critic is a Saboscrivner (ability to write descriptions of meals that can allow the reader to taste the dish). In Brian Wood’s recent Starve, celebrity chefs have to participate in literal death matches.

While these titles are at the cutting edge today, for those of a certain generation, the glossiest graphic novel will not evoke the excitement of Indrajal Comics. Gaudy pages populated by The Phantom, Rip Kirby, Garth and of course Mandrake the Magician. The top-hatted spellmeister, who famously “gestures hypnotically”, resides in Xanadu, and the stately pleasure dome is home to a bizarre collection of friends, including Lothar (a tribal chieftain, strongest man in the world), Narda (Crown Princess of a European principality), Karma (Lothar’s girlfriend, a super-model and a princess) and of course Hojo, their chef.

Even taking into account the inflated CVs of superheroes, Hojo stands out; we are told he is a 10th degree black-belt in judo, that he is fluent in 12 languages (and can read eight more), “excels at higher math” and is a “student of history and philosophy”. The denizens of Xanadu certainly keep him on his toes, in one strip we see Narda doing the shopping, apart from fillet of beef and ice-cream there is also a lot of swordfish.

Hojo doesn’t do lunch however – he leaves after preparing breakfast and only comes back in the evening. That is because Hojo, when he is not dishing out sushi also moonlights as the secret head of international crime-fighting organisation Intel-Intel! No wonder comic book writers of that halcyon era were dubbed schlock jocks.