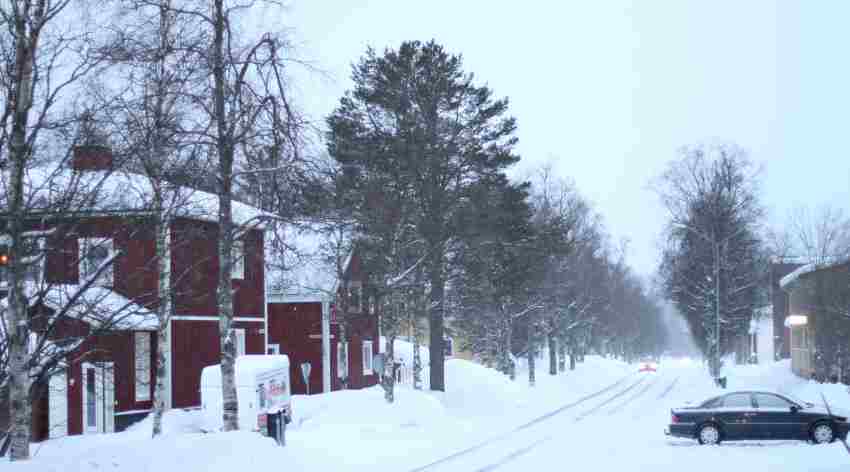 A typical day in Arvidsjaur, and this is when the weather is good. Photographs by Vaishali Dinakaran

Between January and April this year, I lived in Arvidsjaur, Sweden, just 100 km south of the Arctic Circle. Arvidsjaur is a tiny little town, with a big heart and decadent food. In the time that I was there, I was plied with köttbullar, those lovely Swedish meatballs that, if made properly, really do melt in your mouth. I’ve easily eaten the equivalent of half a Rudolph, consuming with relish reindeer steaks, reindeer wraps, smoked reindeer, reindeer salami, reindeer sausages, and, at one point, even smoked reindeer heart. I’ve eaten locally caught salmon in many forms – smoked, poached, and pan seared with a herbe creme. But my real favourite has been the elk (moose) meat. For someone who never cared much for carpaccio, the sight of a plate of fresh carpaccio of the elk variety could make me rapturous. Every single time I’d read the word älg on a menu card, I’d order it. I was doing very well, I thought, with the first four weeks of my three-month stay in Sweden having me tripping through gastronomical heaven. And then my world came crashing down.

It happened on a day like any other. Scrolling through Facebook I encountered a post that changed everything. It was about Anjappar biryani that had just been consumed by my colleagues back in Mumbai. The faces with broad grins, eyes glazed over as though they were in some sort of biryani paradise (not to be confused with Paradise biryani, which is also very good) all made sense at that point. And just like that, the flavour went right out of my Lapland food. Nothing could satisfy my cravings. Except for a plateful of biryani, of course.

The months between October and February constitute hunting season in Arvidsjaur. It’s when the elk and bear, that are eventually served up as steak and sausages, are shot. For me, though, a different sort of hunt began. Within a walking distance of my hotel was a Greek restaurant that served a nice halloumi salad, and a burger joint that served up a burger that was spicy enough to keep me distracted from the thought of biryani at least for the duration of time that it took to consume it. But these were temporary dalliances. 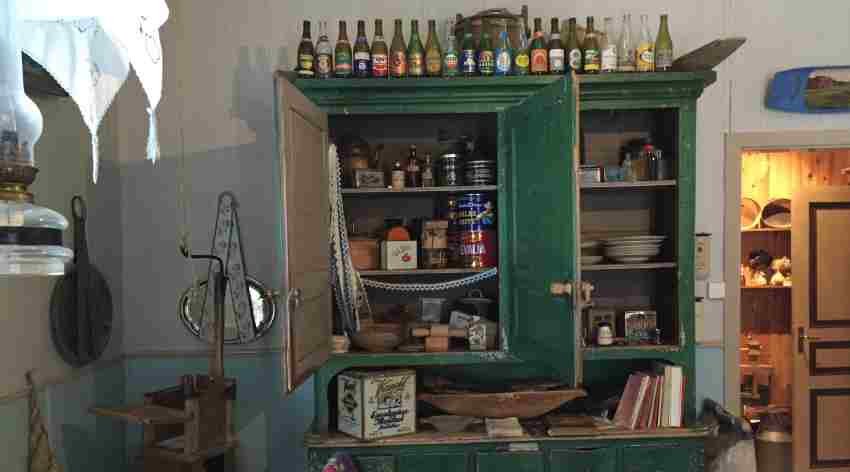 Swedish Larder at the Arvidsjaur Museum

And so began trips to the local supermarkets in search for ingredients that would help me make biryani in an attempt to satiate my craving. Oh, I knew I’d be able to get ginger, garlic, onions and rice. But what of those many spices that go into a good biryani? I wasn’t sure at all. And then I encountered the spice rack at the Coop Consum, one of Arvidsjaur’s two supermarkets. It had spices for every type of cuisine on this good earth. The reason I was so surprised was because Arvidsjaur boasts a population of approximately 4,000 people, but somehow its supermarkets catered to a global audience, which was very impressive. And, save for a rather swift Japanese gentleman who swiped the only bottle of garam masala on the rack the first time I went ingredient hunting, everything else proceeded smoothly. Coriander, fresh, still growing in a tiny pot. Mint, dry. Whole cinnamon, powdered cardamom, nutmeg, cloves, cumin, garam masala (eventually procured another day), chilli powder, turmeric. Nearly all the spices that I simply couldn’t do without materialised. 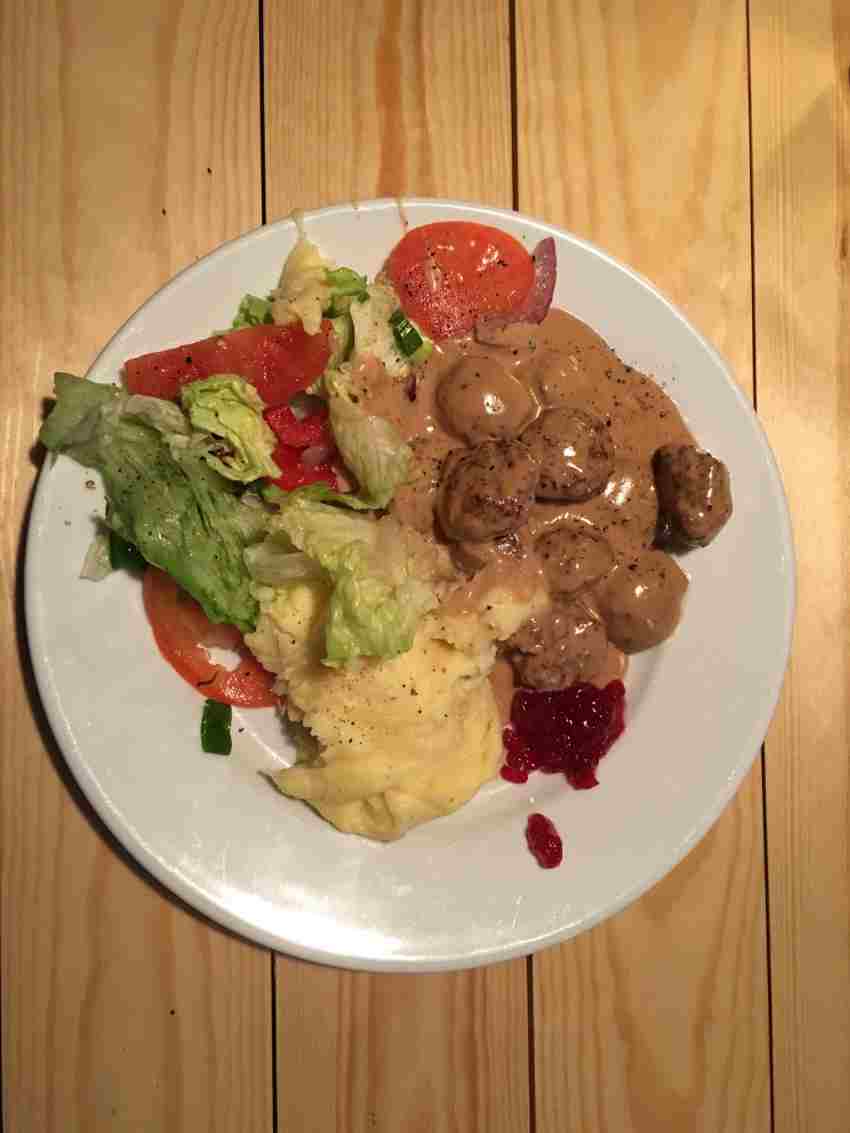 Chicken biryani would be nice, I thought. Not as nice a spicy mutton biryani. But since I was in Sweden, I began to wonder whether elk meat would fit in. It was almost eight ‘o’ clock, and I was planning on eating a plateful of biryani by ten thirty. That’s when I caught sight of a half a kilo packet of minced elk meat. Elk kheema biryani it was. I cleared out my writing desk and began to arrange the spices on it. I skimped on mace, because I couldn’t find it. I wasn’t sure of the green chilli paste that I found, and since I couldn’t find any fresh green chillis, I hoped that the red chilli powder that I planned on dunking plentifully into the marinade would compensate. As would, hopefully, the ginger and garlic. And so I marinated the elk meat, tossed in all the spices I had with chopped ginger and garlic, and a nice dollop of yogurt. While it was sitting there, I sliced the onions and fried them. I boiled the packets of basmati rice, with cumin, for a little extra flavour, until the rice was about halfway cooked. And then I dunked the fried onions and marinated elk meat into the iron pot, layered it nicely at the bottom, and covered it with the half cooked basmati rice. 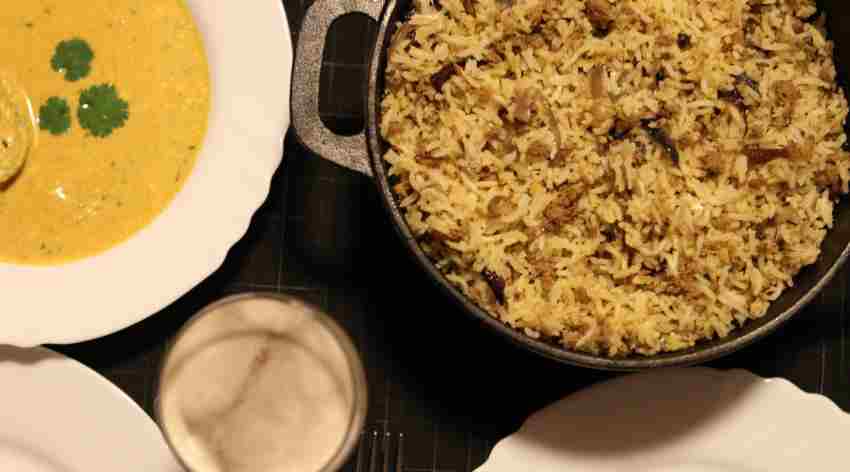 After some time, spent nervously pacing up and down, and laying the table, I switched off the stove, opened the lid, and got my first whiff – the basmati rice, the fried onions, the spices, all nicely melded together – that transported me home. Since I couldn’t manage to serve it all the way from the bottom, I just stirred everything together, marvelled at how right it all looked and smelled, and served it. And then, without waiting for the rest of the dinner party of two, I put the first forkful into my mouth. I was a little surprised that the biryani had as much spice and flavour as it did. The rice was cooked just right, and the meat didn’t have the gamey taste I was apprehensive about. It tasted like biryani. No, not like chicken biryani, not like mutton biryani, not like Andhra biryani, not like Hyderabadi biryani. But like a satisfying biryani from the subcontinent, nonetheless. Dinner that night was a success. And there was plenty left over for the next day.