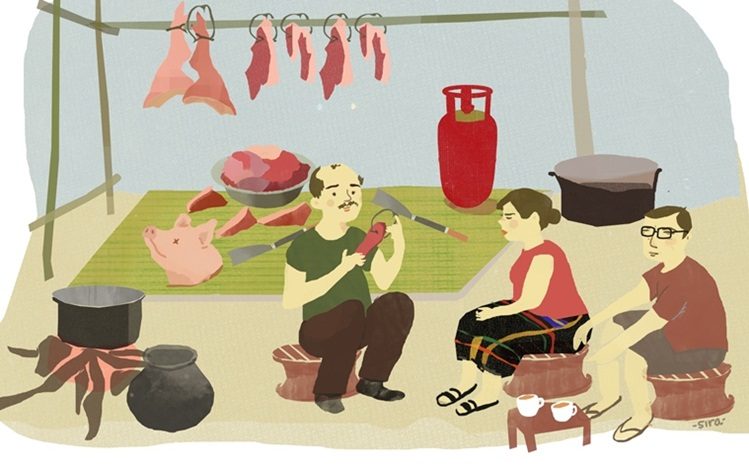 The ground shook as 150 kilos of pig was quickly hauled off the truck by four pairs of straining arms, and crashed to the cement floor at my feet, a wave passing through the porker’s flesh. Then another, slightly smaller boom, and a 100-kilo companion joined it. The open-bed mini-truck that had hauled them in chugged off in a puff of smoke, and for a brief moment, as the two big, black, hairy animals lay there in the nippy Dimapur dawn, I met their unseeing gaze. “Er, sorry,” I mumbled telepathically – for it was entirely my fault that they were here at this moment, and not in the farm where they’d spent yesterday – “and thanks!” Then they were gone, sucked into a whirlwind of activity. The hanlamv was underway.

Hanlamv is a wedding tradition of the Lotha Naga community, which my wife belongs to. In essence, the groom-to-be buys pigs and makes an offering of portions of their meat to members of the bride’s father’s family; they in turn offer gifts to help the couple set up their home and begin married life. Once upon a time, the groom would select a fine specimen and kill the pig himself, and the return offerings could be grain, vegetables, and such other village products. Nowadays, of course, the pigs (at least two is the modern norm) are simply purchased, and cash received in return (no bad thing, as one suitably hefty pig costs a good Rs. 30,000-plus). But it’s not merely a gifting ritual or a ‘bride price’ – the acceptance of the meat by the recipient also signifies acceptance and blessing of the marriage. The giving, and receiving, of the meat is in effect the offering of goodwill on both sides, and for the groom, a welcome into the clan. To me – not being Lotha, or even Naga – the ritual was especially significant, as an outsider joining a tightly-knit community that, for the most part, still lives in a very traditional way.

Until that morning, pork was something I’d enjoyed from a distance (one arm plus one fork). In fact, growing up in a largely vegetarian Kannadiga family in Chennai, all meat was a bit mysterious. It was only around university age that I fully embraced the pleasures of the flesh; then, a writing gig early in my career took me to 18 states of India and then abroad, rapidly widening my meat spectrum to full vibgyor. Or, so I thought. The keystone only clicked into place a few years ago, when I first tasted my then-wife-to-be’s outstanding pork curries, both Naga-style with bamboo shoot and Khasi-style with black sesame: fatty, rich, and with immense flavour, they were aH revelation. They quickly nudged aside Goan pork vindaloo, my erstwhile porcine standard-bearer, to plant their pungent flag deep into my cortex (and my heart, the way to which, my wife is convinced, is indeed directly through my stomach). 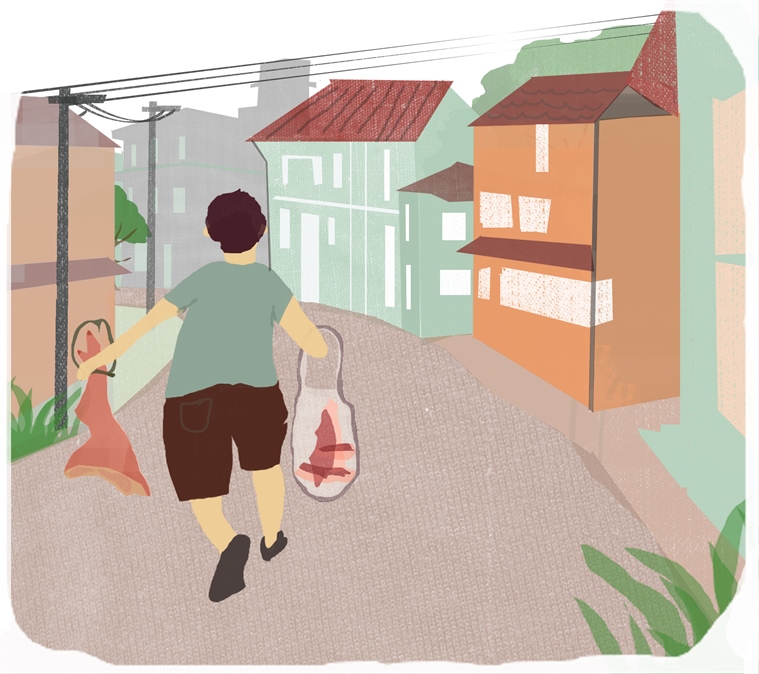 But here, today, I would redefine my relationship with the noble pig. I had to be physically present at the ritual, for tradition, for honour and also out of sheer curiosity. Hanlamv is normally meant to be done ahead of the wedding, but as we’d already tied the knot at a little ceremony back home in London, it was actually overdue by the time we went to Nagaland for the reception. Of course, arrangements had been carefully made by family members; my pig victims had been chosen in advance, and lists of the people who would receive meat drawn up. This, again, is no chance matter – there is a fixed system of allocation, with important family members receiving certain parts; for instance, the oldest male relative receives the head of the animal, and so on, all the way down to the tail.

The morning chill didn’t seem to be getting to the 20 or so people busy in the backyard of my mum-in-law’s house. I’d been up since 5am, but even this was getting off lightly; as a non-Lotha, I’d been given a concessionary pass on accompanying the small group who would actually kill the pigs (with a well-aimed spear to the liver, I learnt later) and transport them home. I milled about as people trickled in, hauling in equipment – gas cylinders, loops of wire, the broad Naga machetes known as daos – while awaiting the truck. Women were stoking big wood fires, cooking cauldrons of rice for the day ahead; a group of tribal elders were gathered in a circle drinking tea and discussing, I presume, matters of state; and the hanlamv team was getting ready to tackle all matters pig.

Once the two beasts were to hand, and a prayer said over their supine forms, no time was lost. Hooking up a blowtorch to a gas cylinder, a man began searing the hair off the hide, evenly blackening the skin all over before removing it. Then followed an expert session of butchering, starting with a slit along the chest and belly to remove the organs. The spleen, long and dark, receives special attention – lore has it that its health and splendour reflects that of the couple’s married life (‘our’ spleen was scrutinised by the elders and deemed to be in fine fettle).

Then, the pig is sectioned up. Head kept aside, the body is laid onto a heavy, tarp-lined wooden table, and under the careful supervision of a bespectacled man with a handwritten allocation register, individual portions thwacked off with the dao. Each chunk is then run through with a loop of wire and hung on nails. Periodically, runners depart, carrying pieces – the hanlamv – to relatives’ houses, and returning later with envelopes. It was marvellously efficient, and by mid-morning, all over: yard hosed down, equipment packed up, and, apart from my wife’s share (the right front leg) hanging in the kitchen, little evidence of the whole affair. And thus it was that I was formally accepted into my new family.

Dinner that night, was, of course, pork curry. And I daresay, it tasted better than ever.