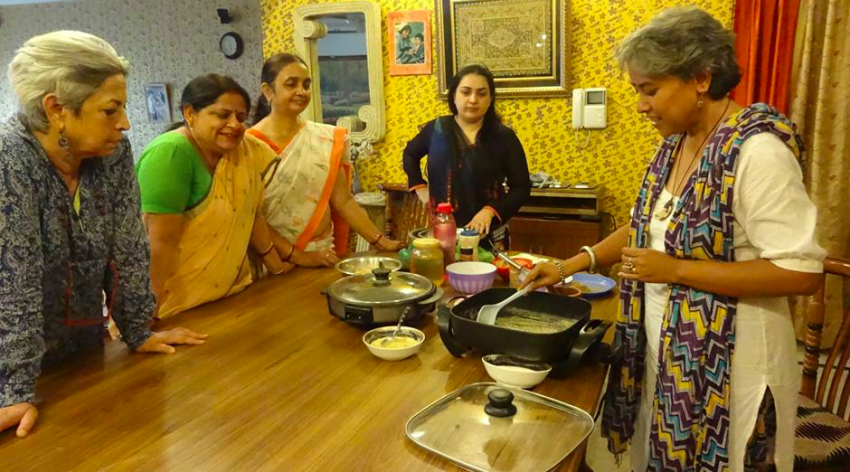 Mention mahua, and the first thing most people think of is the liquor that is made out of the dried flowers of Madhuca longifolia. And, you can’t really blame them, for mahua is mostly used for making liquor. But it was not always like this. Once, mahua was pretty much an integral part of the diet of communities in many parts of India. In some parts of the country, people still view mahua as food, and for the last year or so, Aparna Pallavi has been on a mission to reestablish its identity as a nutritious food.

Pallavi, a former environmental journalist and forest rights activist, first encountered mahua as food some twenty years ago in Ramtek, near Nagpur. “A family of Gond tribals was drying mahua flowers. They told me they made rotis out of it. I asked for the recipe and brought back a little mahua with me. I tweaked the recipe a little by adding jaggery, because my palate was not accustomed to the sweetness of mahua, which is distinct from sugar or jaggery. But the rotis, which I had made with wheat, tasted good.” 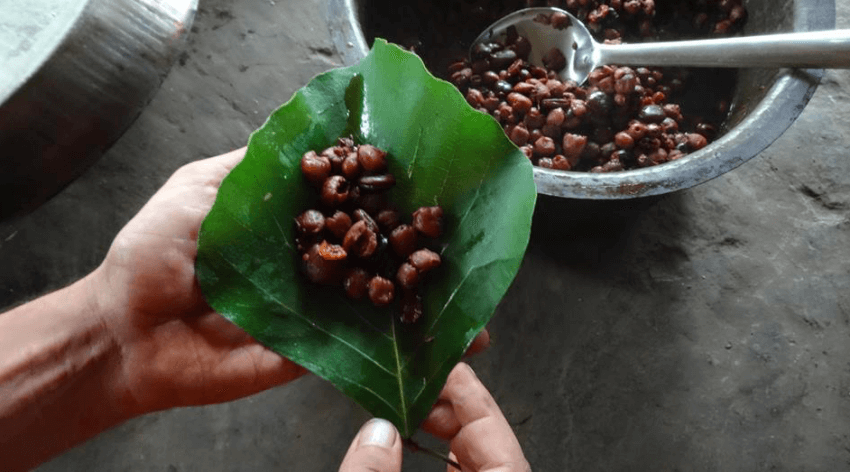 Sargi Konda, an heirloom dish, made from saal seeds and mahua

That first encounter in Ramtek triggered a curiosity about mahua, and wild foods in general, in Pallavi who quit her last job last year, and is now focused on reviving wild foods and “forming communities around their consumption.” And Mahua, says Pallavi, who blogs about her journey here, was as good a starting point as any. “It is available and consumed all over India, it can be dried and stored, and has a long consumption season unlike most wild foods that can disappear really quick. Also, mahua has given forest-dwelling communities a bad name, because it is seen by outsiders as something that is just used for making liquor.”

Pallavi has travelled across eight states in north and central India, and says that mahua is still integral to communities because it is seen as a cash resource. (The mahua collected from the forests is sold off to local traders.) “But there were vibrant food traditions everywhere, too, most of which are on the verge of being lost. In every state I found original recipes specific to those areas, and people shared memories of how regularly it was eaten by their parents and grandparents, and elders everywhere are well-informed of its health benefits. However, when it comes to folklore – songs, stories and all — there is very little left in the memories of people I met.” 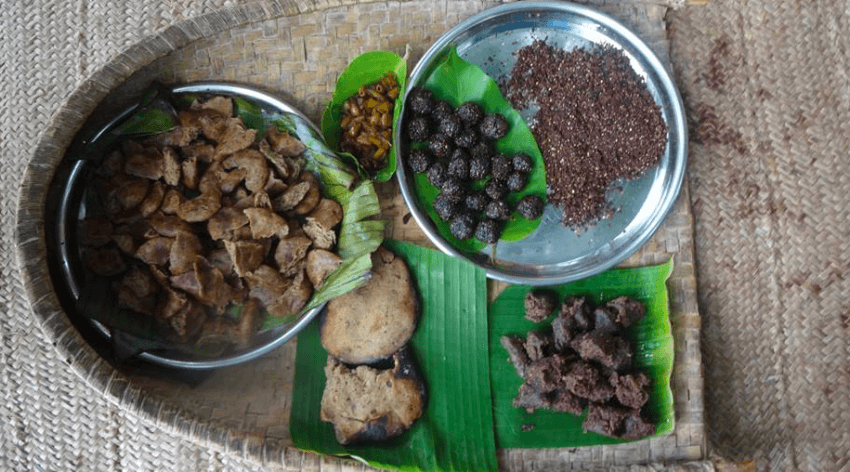 A workshop for rural women in Budmandlo, in Sambalpur, Orissa, saw an exchange
of knowledge, and a spread of seven dishes

Pallavi’s ‘Mahua Yatra’, as she calls her endeavour, is driven by ‘gift culture’, and is not allied to any agency or NGO. She stays at the homes of friends, or tribal families who are willing to house and feed her. “This allows me to build deep connections with the people I work with,” says Pallavi. She also holds workshops that focus on Mahua, in which participants pay “according to what they can, or wish to”. She is also open to donations. Her most recent workshop was held in Karjat, near Mumbai, towards the end of last month. While her Mahua Yatra is still young, someday Pallavi wants to see it being consumed in more households, both forest-dwelling and otherwise. “I’m hoping this translates into an increased awareness around this food, leading to more cooperation between forest dwellers and people in urban areas.”

Here are some of the mahua dishes that Pallavi has encountered and sampled on her travels.

Sargi Konda: “Made from saal seeds and mahua flowers, it takes around two days to prepare and was once cooked all in places which have saal forests, including in Jharkhand, Bengal, Orissa, Madhya Pradesh and Chhattisgarh. I like this dish because it is known among tribals as a superfood, and builds rock solid stamina and immunity. However, taste-wise it is not an easy dish to eat for people who have never eaten saal seeds. I have been eating wild foods for ages, but even I find it difficult to relish it.” 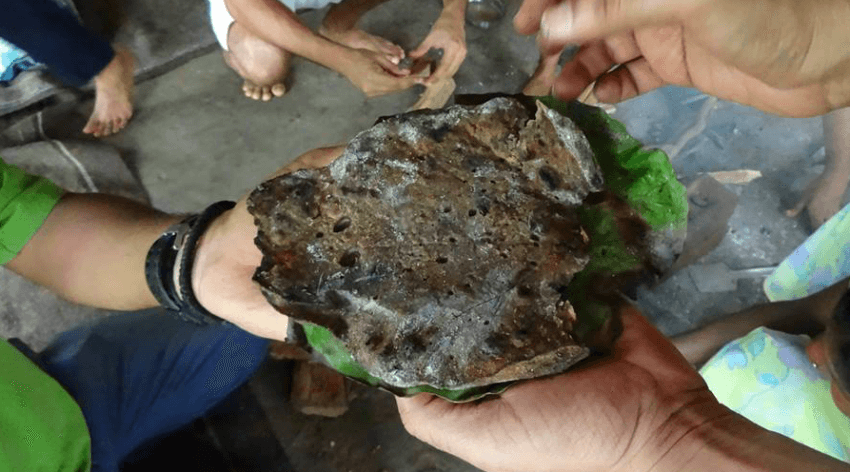 Trying her hand at making mahua paatpura peetha, a dish of rice paste and mahua, in Chhattisgarh

Dahi Mahua: “This is a dish I found in Chitrakoot, on the MP-UP border. It is easy to prepare and easy to appreciate in terms of taste: just boiled mahua flowers with curd added to them. I did an innovation on this dish and made mahua raita – curd with salad and mahua flowers so that instead of just sweet, it became sweet and salty. This is an easy-to-assimilate dish for the urban palate as well.” 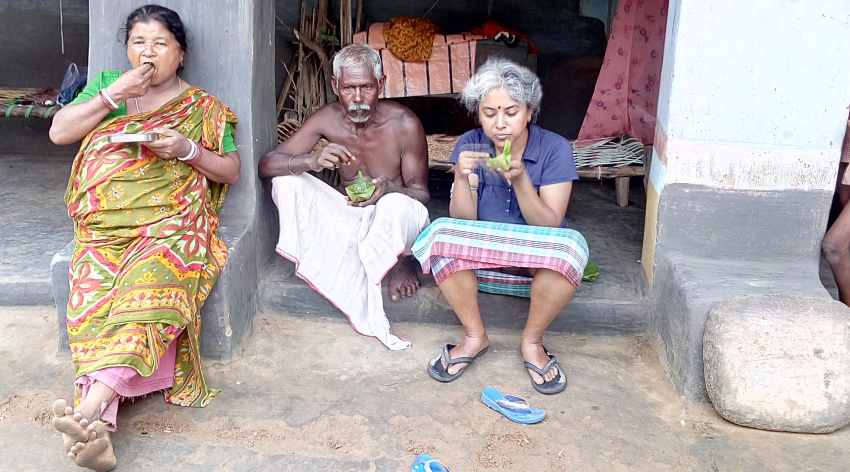 Tasting a rarely made heirloom dish called mahua teke, made from mahua flowers and tamarind seeds, with Dhani and Kanai Mandi, a Santhal tribal couple from Raijpara, in Jhargram, Bengal.

Mahua Korku Puri: “This is one dish you can’t beat in terms of taste. I discovered it by accident – it was forgotten by the Korku tribals  in Khandwa, in MP, where I was working, and people now use sugar instead of mahua. I suggested that we try making it with mahua, and it turned out well, which is when an old lady remembered that it was made the same way in her childhood. The Korku puri is a uniquely styled pastry, which is kneaded, rolled and fried with such skill that a single puri has three different textures. But it is a dish that takes time to master.”