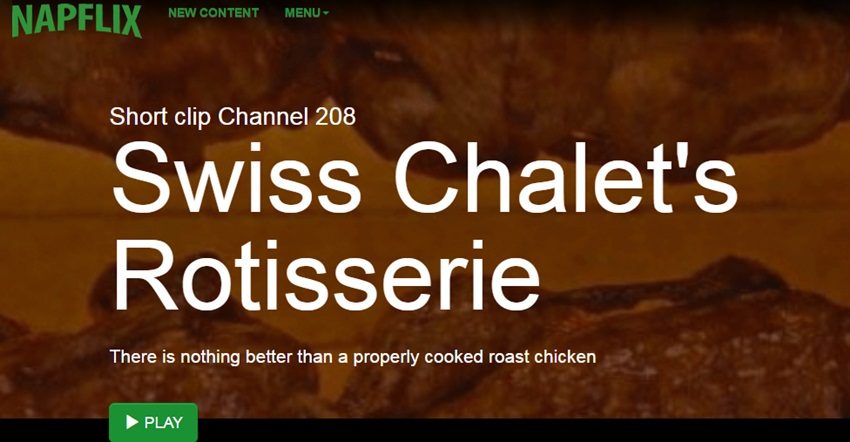 Napflix redefines the whole idea of slow food. No, it has nothing to do with slow cooking. Napflix is a new video streaming service that calls itself the “Siesta Video Platform” and is a space where the the most tedious videos have been curated to ensure that you fall asleep even before they finish. If you love food videos and cannot get enough of them, Napflix maybe a good snooze time option. For instance, the short video of chicken cooking on a spit should whet your appetite and serve as an introduction to the kind of videos that you can expect on this site.

Set up by two advertising professionals Victor Guitérrez de Tena and Francesc Pérez from Spain, Napflix is a play on the popular video streaming site, Netflix, and is a non-profit service. Besides food videos, the site contains all kinds of videos related to classic music, chess and even quantum theory. But if you’re looking for food videos to capture your imagination and hopefully help you unwind and fall asleep, Napflix has a few.

While we can’t wait for the video streaming service to add more food-related videos, here are some that stood out. You have the option of watching life on an apple farm in California and how nectarines are harvested for close to a whole hour. Think of it as an anglicized episode of Krishi Darshan during the good old days when we watched Doordarshan.

There’s even a hilarious infomercial for a juicer and going by the rest of the shows on Napflix, we have great expectations from the site. However, it would be easier to find these videos if a separate category for food was introduced. Once you’re hooked onto Napflix, it maybe a long time before you complained of a sleepless night again.