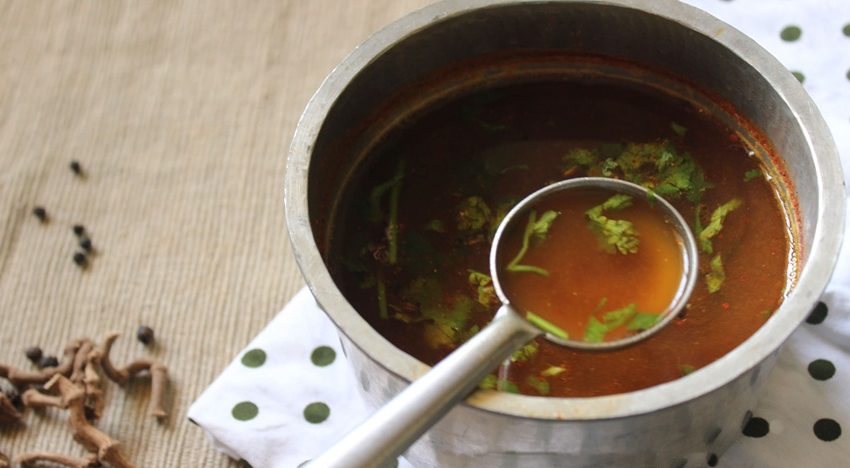 For a south Indian, there’s nothing more comforting that a plate of hot rice and spicy rasam to end the day. The dish, which is more part liquid than lentil or dal, also makes up for all the greasy excesses that you may have indulged in (think bajji-sojji as the south Indians refer to fritters) during the day, because it is also an excellent digestive. While the rasam was a definite inspiration for the colonial era Mulligatawny soup, which translates into pepper water, the latter has evolved into something more than just that since it is made with vegetables such as carrot, cream, meat stock and even bone marrow, at times.

However, it would be sacrilege to add meat to any kind of traditional rasam since it took root in vegetarian homes in south India. There are a range of rasams that are made across south India. The most popular rasams are those made with just pepper and tomatoes with tuar dal (split pigeon peas) and garlic rasam, where the sour punch brought to the dish by the tamarind extract is balanced by the heady taste of garlic. In fact, every state has several variations. Here are three simple rasams that you can make at home.

This recipe uses moong dal instead of tuar dal and the key ingredient of tamarind extract is replaced by lemon juice to bring that refreshingly tangy taste to the rasam.

This one doesn’t use any lentils and instead includes a beetroot-coconut paste that adds an earthy flavour besides lending a vibrant pink to the rasam that is made using tamarind extract.

This rasam is also recommended for healing sore throats and is one of the most popular varieties that is served at south Indian restaurants.