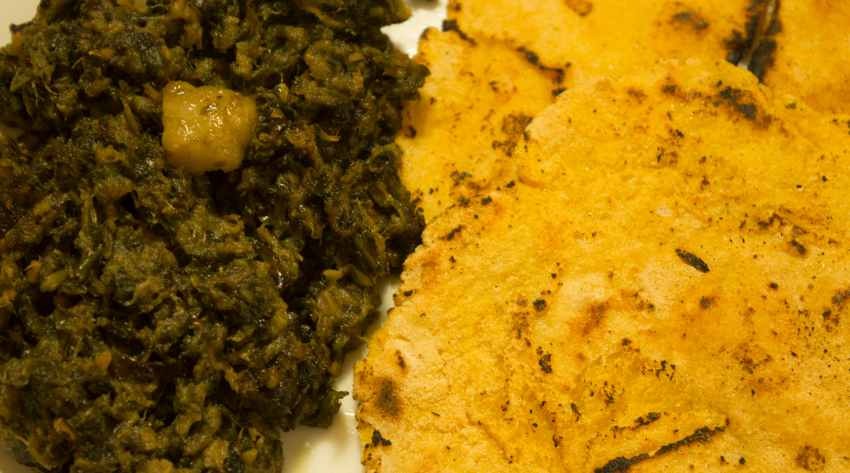 Last year, around November, I dropped in on my uncle Jhampan. He had just returned from Assam with a few kilos of pork, cured in a makeshift smoke-house. He produced a very balanced one pot meal – a stew with a whole lot of palak, methi and mustard leaves. Simmered for a few hours, it turned into a comforting dish, blending the smoke of the meat and the goodness of the green leaves. So I did what a good apprentice would and tried my version of the stew. It was decent, but my city-slicker habits diluted the jungli rustic feel of Jhampan’s dish.

Around the same time my girlfriend Gauri was talking about eating her mother’s Sarson da Saag at their Chandigarh home. It was then – with the memory of Jhampan’s stew fresh in my head – that the idea for this hybrid dish revealed itself. The recipe below is my interpretation of Gauri’s mother’s traditional Sarson da Saag with a pork intervention. This is a North Indian winter double whammy, and will be just perfect for this winter. Keep the meat on the leaner side, as the fat will render entirely, too much will kill the flavour of the saag. Try and get saag from someone’s farm where the chemicals are in check. You can cook the saag and meat and freeze, add the tadka and serve when you want.

First put all the leaves and the meat with the masalas in a heavy pot. Add a little water, just enough to moisten the ingredients, as the leaves will give out their own moisture. Simmer covered for 2 to 3 hours. Never let it reach a boil.

Now the leaves and meat should have turned really soft. Add the makki ki atta. Take a heavy round-bottomed ladle and stir vigorously, grinding the leaves and meat against the sides of the pot. The more you do this, the better the dish gets. 20 minutes is a good minimum time. Take turns if you have back­up in the kitchen and go on for longer. This roughly pastes the leaves and breaks the meat down to its fibres giving the dish a consistency of halim. When you’re done, boil off all residual water collected at the bottom of the pot.

In a separate pan heat the oil till it’s smokey, add the tadka masalas, they’ll be done in a few seconds, so immediately add the sag and meat. Mix well till all the saag and meat has an even glaze from the tadka.

Eat with some aam ki achar and makki ki roti.