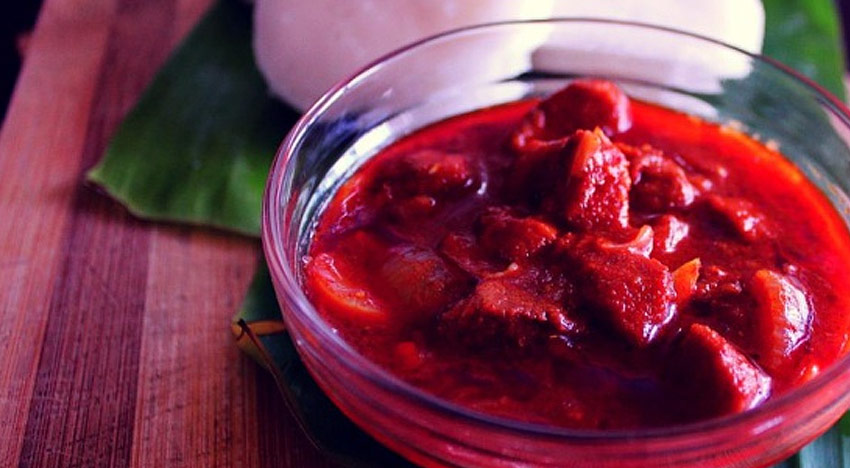 Bafat pork is a fiery curry, local to Mangalore and made with meat marinated in an assortment of spices Photo: The Gulli

Those who have attended music festivals in the country should know that festival food stalls have a long way to go. Both vegetarians and non-vegetarians make do with stuffed rolls or a hurriedly put together rice preparation that tastes like a bachelor’s party leftovers. This is not to say that we haven’t been surprised. In 2012, one of the stalls at the M.A.D. festival in Ooty, which was sold out on all days, served pandi curry, a Coorgi favourite. In 2015, bassist Gaurav Vaz of the Bengaluru folk rock band, The Raghu Dixit Project, announced on his social media timeline that one of the stalls at the Bacardi NH7 Weekender in Bengaluru, named “Albina’s Special”, was set up by his mum and the Bafat Pork that she makes was to die for.

Bafat Pork takes its name after the masala the meat is marinated in including dried and ground chilli peppers, coriander seeds, cumin seeds, mustard seeds, black peppercorn, turmeric, cinnamon and cloves. Says the bassist, “I remember the Bafat pork was made for every important occasion be it a wedding or a funeral or a baptism. To us kids, it was an important day when the curry was made. It’s all the more special now because my mum rarely eats it herself, and only tastes it while cooking, but ends up making excellent Bafat pork every single time.” 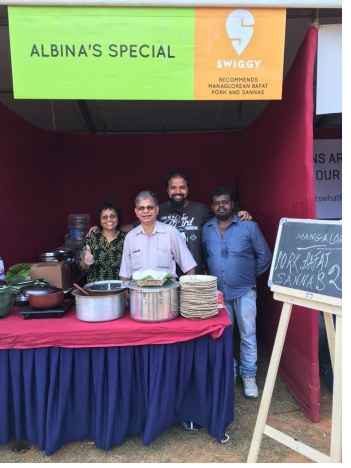 Albina Vaz (extreme left) at the stall at the music festival, NH7 Weekender in Bengaluru in 2015.  Photo: Gaurav Vaz

Home cook and entrepreneur Vaz recalls how Bafat Pork was cooked in Mangalore, where she grew up. Says Vaz, “We would never go out and buy pork since pigs were raised at home back then. Four or five (neighbouring) houses would get together and cut up a pig. We would go collect firewood and the pork would keep cooking in really large vessels for three or four hours.” No Roman Catholic feast is complete without Bafat Pork and the spongy rice cakes or sannas used to mop up the curry. Says Vaz. “Earlier the curry used to be cooked in pig’s blood. Some people, mostly in the villages, still cook it like that.”

The key to making the perfect Bafat pork, according to Vaz, is choosing pork which is 75 per cent meat and 25 per cent fat. “Fifty-fifty is no good.” says Vaz, who now buys her pork from Dhanalakshmi Enterprises near Bengaluru’s Frazer Town. Vaz has two golden rules to cooking the pork. “Never add oil. The soft part of the pork releases oil and this is all the oil you need for the curry. And you should never pressure cook the pork.” Vaz has her own Bafat pork recipe for which she uses powdered Byadagi red chillies. “This gives it a rich, red colour, ” she adds. Since the curry uses no coconut as most other Mangalorean dishes do, it keeps for a couple of days. Says Vaz, “In fact, it tastes better on the next day and the day after.”