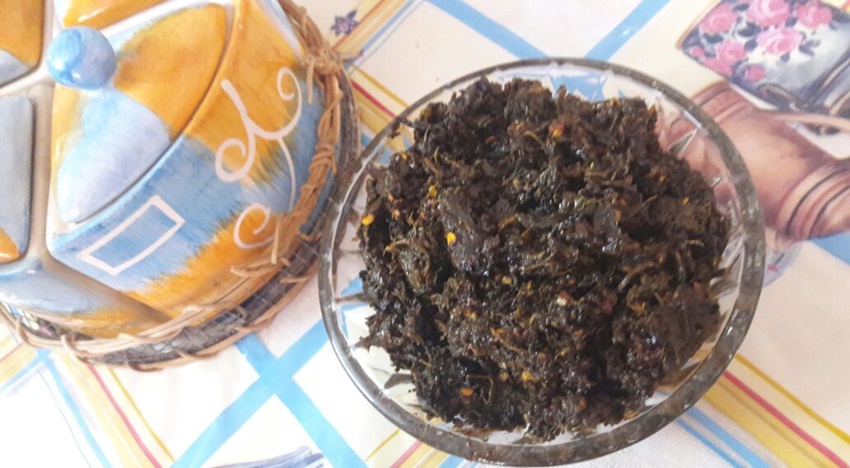 Gongura pachadi Photograph by Srividya S Mehta
Living away from home is never easy. If you ask the Andhrites who have colonised New Jersey, they’ll tell you that it’s the pickles that they miss the most. They have even set up forums to discuss where to source the best pickles, recipes to make them at home, seeds to grow their own sorrel leaves, which are used to make gongura pachadi, and which store-bought pickle brand had the least preservatives and so on.
When I moved from Chennai to a hostel in Mumbai, I was known as the girl who would eat fiery avakaya pickle and bread for breakfast. For long, I tried to find good gongura leaves in Mumbai and failed. During my first few attempts, the chutney turned into a flavourless goop. Recently, I chanced upon a vegetable vendor in Matunga who seemed to have reasonably good sorrel leaves: the texture and flavour of the pachadi is close to if not the same as the one my grandmother used to make.
IIM alumni Srividya S Mehta, who has named her less-than-a-year-old Andhra restaurant in Mumbai after sources sorrel leaves from Four Bungalows and Dadar markets for her kitchen. She says, “But it’s too humid in Mumbai for the gongura to keep even if we use enough oil. It’s also important to get the right gongura leaves. While they are available in many places, the hotter the weather, the more tangy and tasty they are. So we mostly pick up our leaves whenever possible from Vijayawada (our native place, instead of Mumbai / Hyderabad).”
The gongura pachadi is made from young sorrel leaves, which grow in abundance across Andhra Pradesh. While the traditional Brahmin recipe does not include garlic in its recipe, most Andhra pachadis available in Hyderabad and the rest of the state have garlic pounded into them. The leaves are also used to make a pickle, which is equally revered in Telugu homes. So sought after is gongura that a group of scientists at the National Research Centre on Meat (NRCM), led by Hyderabad-based senior scientist B M Naveena, applied for a patent for their chicken gongura pickle in 2014. While NRCM didn’t get its patent, the good people of Telengana will tell you that it is the gonguramamasam or gongura mutton curry that deserves to be patented. “Gongura has always been associated with non-vegetarian food in Andhra, but back home in Vijayawada, it was always comfort food. If there was nothing else on the table for dinner, I could be sure that there would be curd, rice, gongura pickle and onion,” says Mehta.
More recently, Telangana Chief Minister K Chandrashekar Rao visited his Andhra Pradesh counterpart Chandrababu Naidu in Vijayawada to invite him for a yagnam or religious ritual. Naidu had arranged for a lavish meal, which of course included gongura pachadi. Had the tables been reversed, you could be sure that the pachadi would have been the one constant on the menu.
Srividya Mehta’s mother’s recipe for Gongura Pachadi
It’s important to pick up leaves which are mature / fully grown, to get a good texture to the pickle and not have a gooey paste. There are two types of leaves – red sorrell leaves, which are more tangy and the white / green sorrell leaves – which have a pleasant taste. A combination of both the leaves is what we use at home.
Ingredients
Gongura leaves – 1 big bunch
Garlic – 6 – 8 nos
Mustard – 1 spoon
Coriander seeds – 11/2 spoons
Jeera – 11/2 spoons
Green chillies – 7 – 9 nos
Red chillies – 7 – 9 nos
Oil – 1/4 cup
Method