If you find yourself dining by the verdant Fountain lawns of the Secunderabad Club on a Thursday evening, you may hear an old-timer order for Nirmala Reddy’s appam. Appam (savoury rice crepes) is the Thursday night special at this 138-year-old historic club and is usually offered with a pairing of vegetable stew, chicken curry or mutton curry. Appam and Andhra-style chicken curry were amongst the numerous recipes my grandmother Nirmala Reddy, or ammama as I called her, demonstrated at the club’s heritage kitchen several decades back. My grandparents’ association with the club started in 1965 and the Secunderabad Club is an integral part of my memory of ammama. I remember ammama’s childlike enthusiasm for the tambola nights, dandiya nights, and Christmas parties at the club. She served on their house committee for a few years and is still fondly remembered by the members of the club for her culinary knowledge and skill.

Appam was a rare treat for us at home. On the days when my grandmother would make appams for us five grandchildren, we would literally eat them off the pan, jostling each other for a larger share. Ammama’s appams were airy, slightly crisp at the edges and fluffy in the centre. It wasn’t until I began research for my book Five Morsels of Love that I learnt that the appam we had at home was slightly different from the classic Kerala dish. Ammama used urad dal instead of toddy or yeast to aid the fermentation process. Occasionally, she would add freshly pressed coconut milk but more as an exception than a rule. Amamma would add sago ganji for texture and colour (as the sugars released from the sago during fermentation caramelize during the cooking process). As in any Andhra household, our dining table would be replete with spice powders and pickles, which were perfect accompaniments for the hot appams.  However, my favourite way of eating appam is with spicy chicken curry cooked country-style. 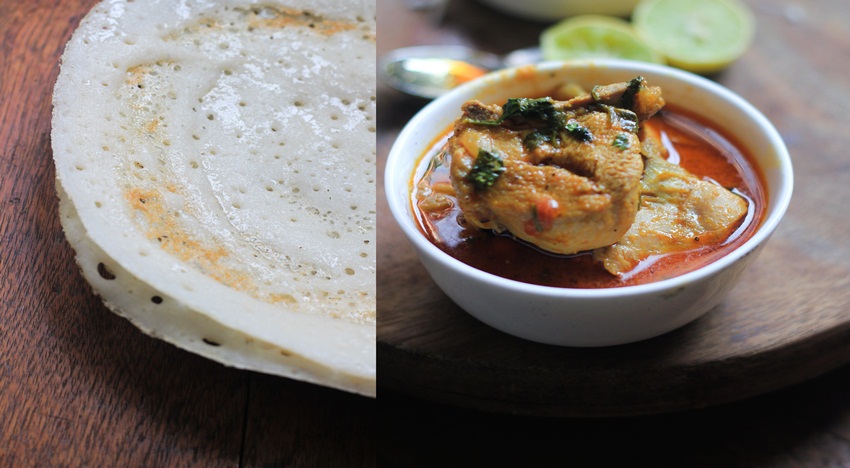 I was overjoyed when my grandfather told me, a few weeks ago, that the library committee at the Secunderabad Club bought a couple of copies of Five Morsels of Love to make them available in their reference section. Images of the club’s tree-lined boulevards, colonial buildings and the wood panelled library floated across my mind and I now know my grandmother is immortalised in a place that she loved spending time at.

With generous inputs from my grandfather G. Kumaraswamy Reddy and my cousin Pooja Reddy (Morsel #4)

Five Morsels of Love is a collection of over 100 heirloom recipes based on G Nirmala Reddy’s 1974 Telugu cookbook Vanita Vanṭakālu. The book is available for sale for Rs 1699 + shipping here.

It is best to start the process the day before you plan to serve the appams, as the batter needs to ferment overnight.

Slow cook country chicken in a gravy made of browned onion, tomato, fresh ginger-garlic paste and a coconut-coriander masala mixed in buttermilk.

A small piece of cinnamon