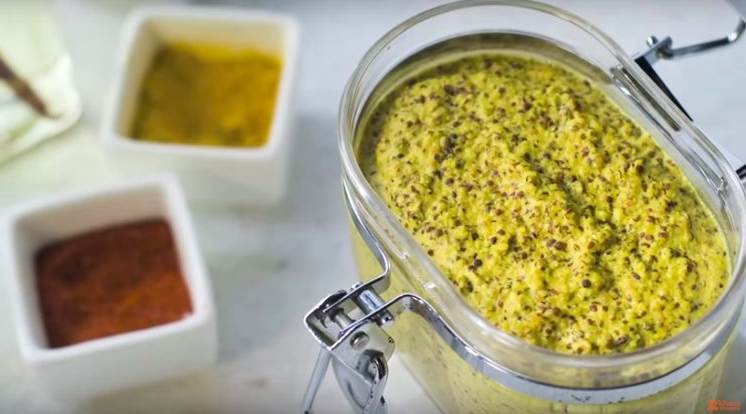 It’s the age of patents, Intellectual Property Rights and Geographical Indication Status, and the recent uproarious debate between Orissa and Bengal over the rosogolla made me sit up and think of a sterling product from the latter state, and a danger that stalks it. I’m talking about kasundi, Bengal’s signature mustard sauce and its best-kept culinary secret, which, if not given its rightful place under the sun (pun totally intended), might soon be claimed by celebrity chefs in India or abroad as their own.

Until recently very few people knew about it outside of Bengal, and then it suddenly burst onto the national scene and subsequently leapfrogged onto the global gourmet map. Unfortunately, because of the aura of mystery surrounding its making, the very word kasundi is today misunderstood and misrepresented. It is described variously by some globally renowned chefs as the “answer to the ketchup”; “ketchup with a lot more going on”; and, among others, “a rich, unctuous tomato sauce of Indian origin”! A famous, internationally acclaimed Indian celebrity chef even made the unpardonable mistake of institutionalising a dish made with plain mustard paste and giving it the kasundi tag.

What is Kasundi?
Kasundi is a sauce made by fermenting mustard seeds. It is not plain mustard paste. Bengal abounds in stories about kasundi-making. It was a complex ritual spoken about in hushed whispers and with great awe. Families that made it were highly respected. The making of kasundi was an auspicious ritual that demanded a high level of hygiene and purity. Many families were forbidden to make kasundi on the premise that it was inauspicious for them, especially if some tragedy had befallen them during the making of the sauce in the distant past. Having grown up on such stories, none of us have ever seriously attempted to make kasundi at home, unquestioningly accepting the theories about the complexities of the ritual, happy enough to buy the bottled variety, the best being the one which purportedly followed the recipe of Dhaka Bikrampur, in undivided Bengal.

The history
The term Kasundi was actually used for a type of achar/pickle, and was not necessarily only the sauce that we know it as today. (‘Achar’ comes from achaar, meaning ritual). And kasundi was the king of all pickles in Bengal, which, if stored under the right conditions, remained edible for almost 20 years. From the month of Magh (Jan-Feb), kul or berries were the first pickles or chutneys to be made, followed by tamarind, and then mangoes. This was also the time when mustard was harvested. Therefore, the pickling of mustard followed, all in preparation for the monsoons. Any pickling that was done with the indigenous fruits of the season, or various dried saags or greens such as coriander, pudina and amrul — with dry, ground mustard and with or without mustard oil — was called a kasundi. Some had just salt and mustard powder, dry chillies and haldi and mustard oil; some had combinations of other dry, ground spices such as jeera, kalonji, fennel, randhuni (wild celery seeds), ajwain, pippali, or long pepper, methi, cloves, green and black cardamom, kebabchini, javitri, jaiphal, dried mangoes, dried kul etc. It was also made with a combination of fruits like mango and tamarind, or kul and tamarind, or amda and tamarind etc. Then there was the ‘Gota Kasundi’, made with a long list of dry spices and some dried kul and dried mangoes that was powdered and stored, and sprinkled over cooked  vegetables or saags for enhanced flavor. Obviously, we do not find the use of the tomato in such historical data, because it still hadn’t made an appearance in the Bengal kitchen.

The Kasundi today
The one made with just mustard is the one that is celebrated today, and and it was actually known as ‘Jhal Kasundi’(fiery kasundi). Different homes had different recipes for it. The simplest one was made with dry ground mustard seeds (both black and yellow, taken from the newest crop), water, salt and haldi. The more complex ones had minuscule amounts of 12 masalas: haldi, dry red chillies, bay leaf, coriander, cumin, fennel, pepper, ginger, randhuni, cinnamon, javitri, or green cardamom and kalonji. To this was added the paste of green mango as a souring agent. The making of the sauce was done under completely sanitised conditions for fear of the sauce going bad. It, therefore, could not be made in humid weather. The rituals surrounding the making of this kasundi were long and tedious. It began on Akshay Tritiya, in the dry month of Baisakh, with the pounding of the mustard seeds into a powder. It took more than a week to make, and the process included sunning the pounded seeds for two to three days at a stretch. The sunning took away the bitterness and introduced the ‘jhaanjh’, or pungency which went up your nose. After that it was bottled and again sunned for a few more days. The kasundi was then ready to be used, and the sauce, if made under perfect conditions, remained edible for years.

Yes, you can make it
Given modern appliances, it is a myth that kasundi-making is a complex ritual. Anyone can make a good kasundi provided they have access to bright sunlight and the right recipe. So, as you can see, it is not “a thick unctuous tomato ketchup”! We got acquainted with tomatoes only after the colonial rulers introduced them to Bengal, and yes, given Bengal’s penchant for innovating with anything new where food is concerned, while there indeed is such a thing called the tomato kasundi, it’s not mustard paste mixed with mashed tomatoes.

Get yourself a bottle and know the difference. It’s had best with fresh sauteed greens or with snack items such as fish fries, or chops and cutlets. While it is never used in cooking, Bengalis have recently discovered that it serves as a great marinade for fish or chicken, items that cook quickly. Too long a cooking time will render it bitter. So try it out for your barbecues once the weather cools down. You won’t need anything else.