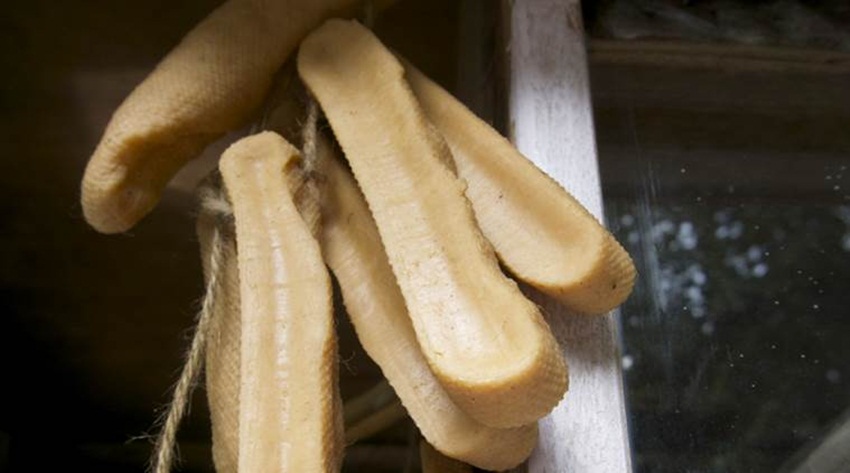 Hard and aged chhurpi tastes nothing like soft chhurpi. Photograph by Aditya Raghavan

The makeshift highway stalls, bustling market shops, and ad hoc village stands of Sikkim carry maalas of bite-size pieces of Chhurpi strung together on twine for the eager trekker. While it may be the size of a regular bite, this traditional hard cheese, made with yak or cow milk, cannot be chewed down easily. Pressed and aged dry to a bone, Chhurpi is a form of preserved milk that is meant to last for months, if not years. And, it is usually chewed for minutes, if not hours. This protein-rich cheese makes for a great nibble for herders — and hikers — as they traverse mountainous terrains for days.

Good cheese starts with good milk. Lall Bahadur Kafley has one milking cow in his humble dwelling in Darap, in west Sikkim. After a portion of milk is consumed fresh, the remainder of his daily ration is collected in an aluminium pot, and kept in a warm place. The raw milk ferments over few hours, turning into runny yoghurt. Every day, fresh milk is added to this fermenting pot, giving bacteria fresh food and producing a piquant quality with intricate flavours. Eventually, about six days later, Lall Bahadur churns all the yoghurt in a wooden churner for at least an hour before bright yellow butter disengages from the watery medium. This beautiful butter bears a strange, almost stimulating dairy taste that always takes me back to the mountains. 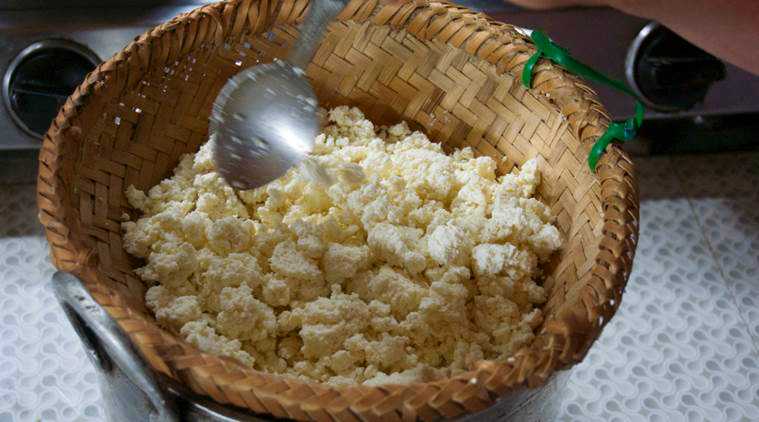 Most of this butter will soon be converted into ghee, as a means to extend its life. The remaining buttermilk, known as mahee in the local dialect, is the source of chhurpi. My hosts, Shiva and Radha Gurung, run a charming homestay called Daragaon Village Retreat, and memories of my residence there summon up views of Kanchenjunga at sunrise, walks through black cardamom fields, the taste of freshly brewed chang (millet beer), and Radha’s scrumptious, home-cooked food using organic ingredients from their garden.

When I think of ancient cheese-making cultures, I always picture a woman gently working away at milk. Radha, in character, begins to stir the mahee over a stove in her quaint kitchen. As it reaches a boil, the buttermilk splits into curds, with vacant, clear whey around them. The curds continue to simmer and, as they do, they aggregate into a giant mass of solid paneer-like cheese, floating over gently bubbling whey. Finally, Radha feels the cheese has released enough moisture and turns the gas off, allowing the dense mass to settle to the bottom. After an hour or so, the springy cheese curds are strained into a bamboo container. 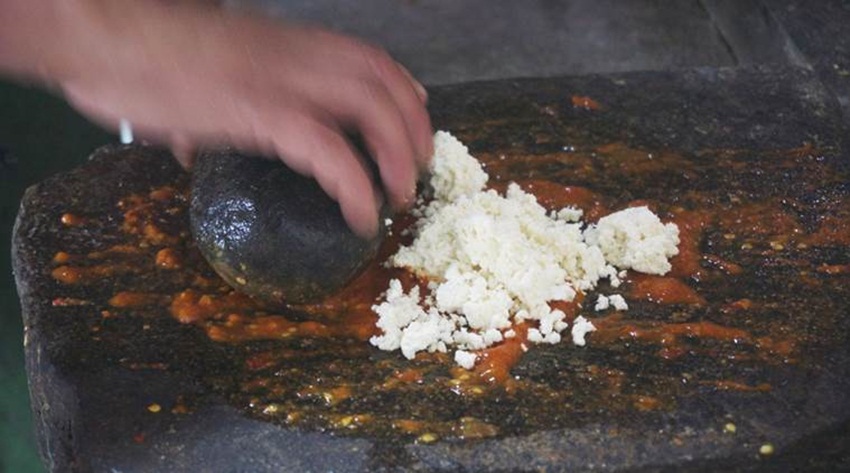 This lesser-known young chhurpi can be consumed fresh. Stored in a container, in a cool place, it has a two-week shelf life. It is soft, crumbly, and bears an enjoyable, tangy bite. Dairy herders that like their cheese to last months and endure a variety of weather conditions would further press these curds into a firm solid and dry-age them, sometimes over smoke. The salt-less, dry wheels of cheese are then sliced into sticks or bite-size pieces. On cutting them, the characteristic rubbery and mildly glossy texture of aged and hard chhurpi can be seen. The unsmoked variety is usually basted with thick, evaporated milk as a secondary layer of preservation.

Radha enjoys using young and soft chhurpi to add creaminess to her delectable chutneys. She boils a tomato till it is fully cooked and mashes it up with raw garlic, dalle chilies – extremely spicy local chilies that have a noticeable citrus fruitiness – and generous chunks of soft Chhurpi. 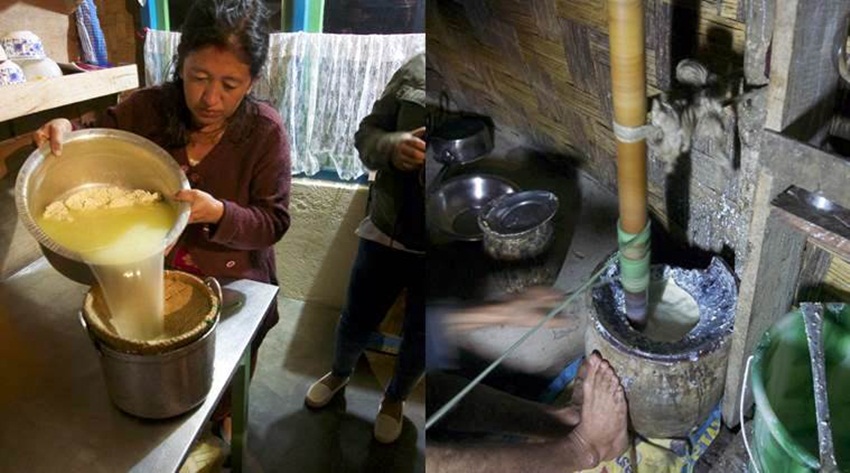 The chhurpi being strained by Radha Gorung, the author’s host in West Sikkim (L), all the yoghurt is churned in a wooden churner for at least an hour. Photograph by Aditya Raghavan

Hard and aged chhurpi bears little resemblance to the complex flavours of soft Chhurpi. I have tried several ways to fall in love with it. It is definitely a breakthrough when you allow saliva to slowly soften the cheese, so you can finely pestle it into a creamy froth with your teeth. Unsurprisingly, some people call it doodh supari. I did swell with pride when I saw the American pet supplies store, Petco, carry yak “Chhurpi chews” as dog treats for heavy chewers and teething puppies. Oblivious dog owners in the U.S. have now heard of Chhurpi and are willing to pay the equivalent of Rs. 450 for 150 grams of this cheese.

The versatile soft chhurpi, however, has found a special place in my heart. It was a chilly evening in the town of Kewzing, in south Sikkim, when I truly fell in love with it. The lady of the house offered us creamy, soft Chhurpi cooked in ghee, to be eaten with rice. It was elegant. It was milk. Milk that was fermented, then separated into butter and buttermilk, each of which were further cooked in different ways to remove moisture, and brought back together in a dramatic confit.