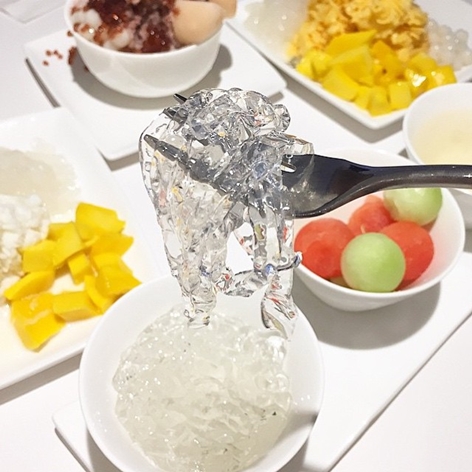 Fans of the traditional Japanese ramen can now slurp on some more of the soupy noodle dish, courtesy of NYC’s The Dessert Kitchen. Hailed as one of the biggest Instagram trends, this creation from the popular NYC dessert haven is a sugary version of the classic. Noodles made from algae, sit in a soup of condensed milk and are now capturing hearts – quite literally – across Instagram hashtags. Ice cream ramen as a concept sounds outlandish to say the least, but the sweet version of ramen has found many fans. The name, however, is a bit deceptive because there’s no ice cream or any ramen noodles that go into the making of the dessert. Called ‘Ice Stream’ at The Dessert Kitchen, this dessert uses Kanten or agar, a traditional Japanese jelly derived from algae, which is usually colourless. Agar is commonly used in a lot of traditional Asian desserts and gives the dish the Instagrammable, transparent jelly-like look and feel. Flavours available include an assortment like green tea milk, honey, and brown sugar. These noodles sit in a pool of condensed milk and crushed ice and like most desserts these days, come with the option of add-on toppings like fresh fruit, mocha, white peach syrup to build up the whole ‘ramen’ bowl. Not forsaking vegans, there’s also a version for them that uses coconut milk instead of the condensed milk to slurp the kanten noodles with.  And despite being cold and sweet, this ramen dessert stays true to the slurp factor associated with a bowl of traditional ramen. The trend is currently popular only in NYC, but we wouldn’t be surprised if it soon cross shores to reach plates in the East, where the traditional dish is more or less a staple. Are we eager to have it in India, probably not so much, but we’re certainly curious.

#dessertorder | 📷: @chloetjohnson – usually I put music to food videos but the commentary in the background is the best 💙🍜 #RamenIceCream (📽 via: @eatmenyc)

ICE CREAM RAMEN OMG 😲🍜🍧😛💦👌🏼 get it at @dessertkitchennyc! #FoooodieeeObsessionEatHere TAG YOUR FRIENDS THAT NEED THIS!!