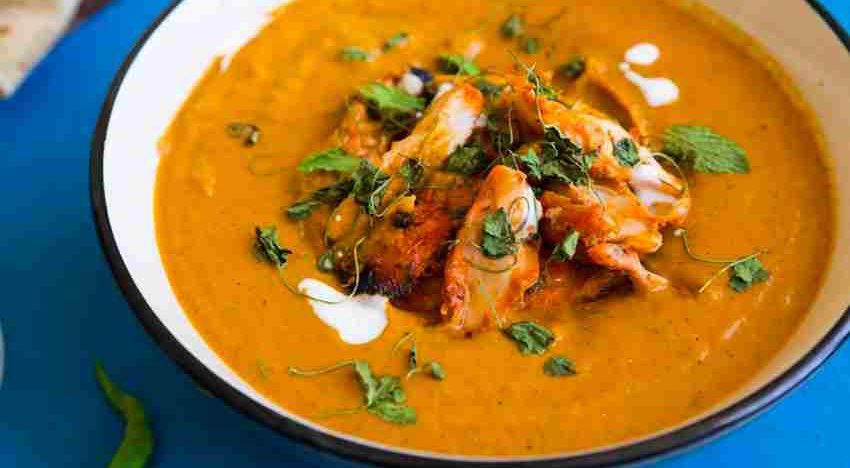 Contrary to popular perception, the samosa, or biryani, or even the idli is not a quintessential Indian dish. Most of the food items we love today — the falooda, or kulfi, or gulab jamun also come to mind — have all travelled to India from elsewhere. But there are still certain iconic dishes that are truly Indian. On Independence Day, we take a look at some of these delights.

Butter Chicken
Over 60 years ago, Kundan Lal Gujral, owner of the iconic Moti Mahal, in Daryaganj, directed one of his staffers to cook leftover tandoori chicken chunks (the restaurant’s original specialty) in a tomato cream gravy. The result was a succulent, easy-on-the-palate dish, which, because of its generous use of butter — and mild sweetness — came to known as Makhani Murg, or Butter Chicken. The rest, as they say, is history.

Mirch Ka Salan
Decidedly Hyderabadi in nature, Mirch ka Salan, with its interplay of sweetness, sourness and pungency, is among the few dishes that brings together the Telangana, Karnataka and Marathwada styles of cooking. Popular lore has it that it was one of Emperor Akbar’s favourite dishes — “with local spices, condiments and souring agents from regions all over the kingdom, much like his dream for united kingdom” — but it most probably came into its own during the reign of Muhammad Quli Qutb Shah, who founded Hyderabad in 1591. Daulat Ki Chaat
A winter specialty generally found in Delhi’s old bylanes, this hard-to-master, rich sweet-savoury-nutty dessert is essentially condensed milk forth served with sprinkling of sweet mawa, dry fruits and a drizzle of saffron juice that gives it a visual opulence.The technique used to harvest the milk froth or foam came from Afghanistan, but Daulat Ki Chaat was perfected during the reign of Sadat Khan of Oudh, and made in honour of Emperor Aurangzeb.

Bisi Bele Bhath
Karnataka’s Bisi Bele Bhath, a nourishing and hearty dish that combines rice, lentils and vegetables in a spicy mix, can be had for breakfast, lunch or dinner. The late eminent food historian K T Achaya, in his book A Historical Dictionary of Indian Food, traced its origins to a 10th century dish called Kattaogara, which he described as rice mixed with ghee, salt and garlic. However, Mysoreans claim that the dish was invented around 300 years ago by a cook at the Amba Vilas Palace (more popularly known as the Mysore Palace). The cook, it is said, spiced up the humble rice-dal dish with cloves, turmeric, mustard seeds, pepper, cinnamon, tamarind, dried coconut and ghee-roasted cashew nuts. The BBB soon made its way into the famous vegetarians kitchens of Udupi, and vegetables were gradually added to transform it into an immensely popular one-pot meal. Rasagulla
The rasagulla was born in Puri, in Odisha, where this 700-year-old sweet dish was offered to Goddess Mahalakshmi as prasad, especially on the last day of the Rath Yatra. But Bikalananda Kar, from Salepur, near Cuttack, is credited with the bigger, softer, creamier form of the dessert we are familiar with today. The technique of steaming the chenna balls and then allowing them to slowly rise in a sugar syrup was first mastered by Kar.

Litti Chokha
Ibn Batutta encountered the Litti Chokha — “sun-baked wheat chunks” — back in the 14th century, but it was probably being eaten way before that, and was possibly a staple as far as back the time of the Nandas and Mauryas (around 300 BC). Litti is often considered to be the older cousin of the Rajasthani favourite, Dal-Bati-Churma, and was popular with the likes of Tantia Tope and Rani Lakshmi Bai, whose armies found it to be a perfect on-the-go meal. (The making of chokha needs no utensils but a low fire, and this made travelling light.) Mysore Pak
Often described as the ‘King Of South Indian sweets’, this ghee-laden, fudge-like sweet traces its origins to the reign of King Krishna Raja Wadiyar IV (1884-1940). Legend has it that the chief cook of the Mysore Palace, Kakasura Madappa, while preparing lunch for his king, was asked to prepare a different sweet. He decided to experiment with a a mixture of ghee, besan, and sugar, and this new sweet treat was greatly relished by the king. Madappa’s son Basavanna opened Guru Sweets on Sayyaji Rao Road in Mysore, and today, close to a century later, it is run by the fourth generation of Madappa’s family and is still the place to savour the most authentic taste of this legendary sweet dish.

Undhiyo
A one-pot meal, the undhiyo is a Gujarati winter favourite. It is made with tender Surti beans, unripe banana (except in Surat where they use ripe banana, peels-on), small eggplants, starchy potatoes, purple yam and dense, almost-bitter muthias (methi nuggets made with chickpea flour), generously coated with a dry masala of fresh, grated coconut, coriander and fresh green garlic, all fried in a generous proportion of ghee. Khichdi
The original khichdi (from Sanskrit krsara) was a medley of roasted sesame seeds, rice, butter, salt and lentils. Today, of course, this perfect meal has as many versions as they are communities in India, with each having its own specialty, including the Wodeyar Palace’s signature’s Keema Khichdi and Rajasthani Bajra Khichdi.

Panchmel Dal
Dal finds mention in ancient scriptures such as the Manasollasa, and in epics such as the Mahabharata. A special kind of channa dal was prepared to mark Chandragupta Maurya’s marriage to Princess Helena in 303 BC. The Panchmel Dal, which today has nine different variants across India, is believed to have been invented in Mewar, around 700AD, and it was introduced to balance out the fiery flavours that dominated the Mewari table. Roti
Like the puri, roti, too, originated in ancient India, and finds mention in classical Ayurvedic texts such as the Bhavaprakasa. Akbar was known to be a huge fan. In his Ain-i-Akbari, Abul Fazal writes, “Akbar, who was known to be a frugal eater and often liked to eat alone, had taken such a liking for this thin, roasted flatbread made of wheat, that he would often eat it as a snack with ghee and sugar.”

Ker Sangri
The spicy Ker Sangri, made with the ker berry and the sangri bean, is an outstanding example of local innovation. It is a rich source of protein, and the ingredients that go into its making can survive a drought. Only chillies, oil and salt is needed to cook the dish that is often made overnight, and can be had for the next few days. Laddoo
These sweet treats — and there are over a 100 different varieties in India — were originally little balls of medicine. It is said that the legendary surgeon Susruta The Elder would often infuse little balls made of sesame seeds, jaggery and peanuts with medicine and administer them to his patients. In his ledger King Harshavardhan mentions how laddoos were served as breakfast at Nalanda. Weighing 75gm each, these laddoos were specially crafted to keep the mental, physical and spiritual health of the students in sync. Over time, they also came to served as prasad in temples.

Gongura
The spicy sour sorrel leaf relish is one of the best exports from Telangana to the rest of India. Gongura chicken, mutton fried in gongura and hot gongura fish kozhambu (a gravy-based dish) – the gongura leaf, which is native to Africa but has been used for its medicinal properties than as an ingredient in the kitchen, is cooked with all kinds of meat. But the most popular gongura dish is the gongura pickle – best eaten with rice and a side of raw onions. Pani Puri
Everybody loves Pani Puri. The round, hollow puri filled with tamarind water is believed to have been a popular snack in ancient Magadha (present day Bihar), right from 600 BC. It was from here that the chaat reached different parts of the country, and evolved into the gol gappa and the puchka and so on. And, on its journey to different parts of the country, it changed not only in size, but also in the way it was presented — from the introduction of meethi chutney and garam masala to potatoes and chickpeas, each region added its own flavour giving it a new charm.

Naga Pork curry
The Naga Pork Curry isn’t just a masterpiece of aromas and taste, but a great Slow Food dish that best represents the food culture of the Nagas. The curry makes use of smoked pork – an indigenous technique perfected over the ages — and is usually made with bamboo shoots (fermented) and axone (fermented soyabean). Unlike Coorg’s Pandhi Curry, the pork in the Naga curry is cooked in its own fat. Thalipeeth
A hardcore Maratha food, favoured by Shivaji, the most interesting thing about spicy, multi-grain pancake is its batter, which is a mix of wheat, sorghum, millet, rice and corn along with some dals and spices, all roasted and ground into a wonderful aromatic flour.

Dosa
While the Idli might have an Indonesian influence, the Dosa is believed to be as Indian as they come. The Dosa, which is said to have been among the first food offerings in temples in south India, around the 2nd century AD, was created in present day Tamil Nadu, but another school of thought that credits its invention to the cooks of Udupi. Chicken Manchurian
The Chicken Manchurian (or even Gobi Manchurian) is as Chinese as Khau Suey is Indian. But, it is among the stars that popularised Indian-Chinese in this country, and deserves a mention on this list. The popular dish was invented by China Garden’s Nelson Wang. The owner of Mumbai’s first Chinese restaurant took cubes of chicken, coated them in corn flour and deep-fried them. This was later added to a sauce prepared with onion, green chillies and garlic, with a dash of vinegar and soy sauce. A quick stir, and the first Chicken Manchurian made its debut in 1975.

Masur Tenga
Masur Tenga’s ancestry can be traced back to the last years of the Kamarupa Empire, when Assam came under the influence of Bengal, and incorporated the art of cooking fish with souring agents such as lemon. This fish curry gets its flavour from the paanch phoran spice mix. Earlier versions used smoked fish and even duck, but most contemporary ones use fresh rohu.