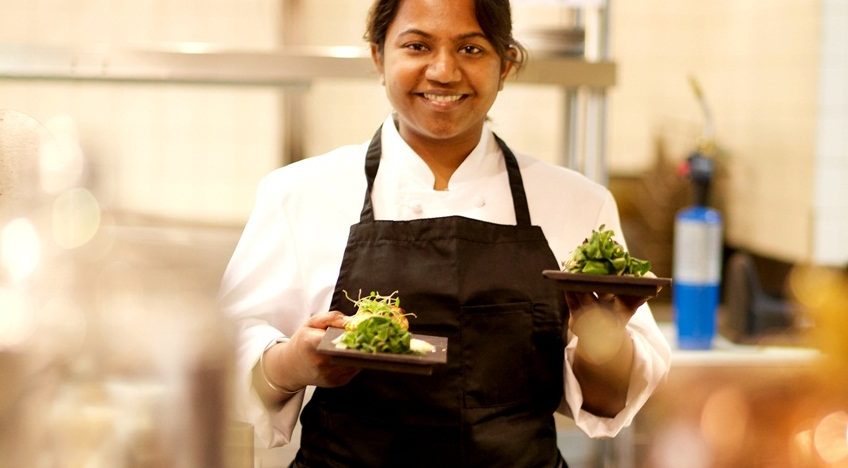 Thirty-year-old Aarthi Sampath, who grew up in Mumbai, and is now based New York working as the chef de cuisine (head chef) of Michelin-starred chef Vikas Khanna’s Junoon, can tick off another box in her list of accomplishments. Sampath recently won the final round of American cooking show, Chopped, edging out competition from three other pro chefs in the pressure test.

The challenge was to create winning dishes in all three rounds – an appetiser in 20 minutes, an entree in 30 minutes and a dessert in 30 minutes, using ingredients out of a mystery basket. For each of the rounds, Sampath impressed judges with her Indian take on the dishes. For the appetiser round, the chefs had escargot in their baskets and sprouts, which proved to be tricky to use, among other ingredients. Sampath took inspiration from Kerala cuisine to serve a champion dish of snails cooked in butter, pepper and garlic sauce with cilantro. For the appetiser round, garlic knots seemed to be a favourite ingredient and she served an upma with garlic knots with masala-fried tile fish, again cooked Kerala-style, chayote squash coconut puree and a chocolate lemongrass reduction.

For the final dessert round, Sampath did a Shahi Tukda version of an Angel Cake served with Grenadine Srikhand, Caramelized Almonds and Pomelo Mint Salad, winning her the title and $10,000. In fact, all her colleagues at Junoon got together for a viewing party at the restaurant in New York to watch Sampath ace all rounds. Sampath, who began as an intern at Junoon, has trained at The Taj group of hotels in Mumbai, Delhi, Hyderabad and Chennai, and has worked with chefs at the renowned non-profit organisation James Beard Foundation, which is regarded as the hub of America’s culinary community.