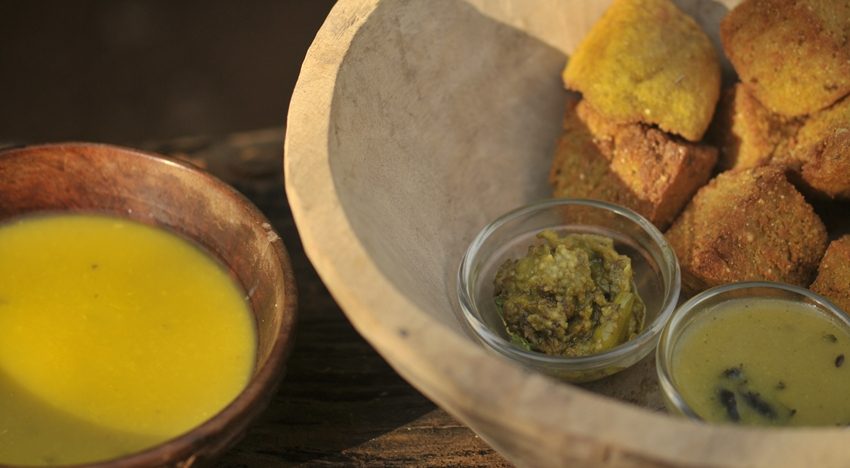 My origins lie in Kadgaon, a small village , on the outskirts of Jalgaon in northern Maharashtra. Its entire population was no more than 3000. Though my grandfather had moved out of the village when he was very young, some of my father’s cousins still lived there and as a kid I used to visit them during school vacations.

The thing about such small villages is that everyone knows everyone, and even their relatives! So during a wedding, the entire village was invited. The invitation actually suggested, “keep your chulha (stove) off”. Summer being the wedding season, we were invariably able to catch a wedding or two on our visit.

The typical wedding dish was varan batti, vangyachi bhaaji ani kadhi. (varan is daal and vangyachi bhaaji is the baingan or brinjal ki sabzi). You would expect daal baati only in Rajasthan, but we have our own version of it. Well, during weddings, it used to be more of baflas than baatis. The difference – baati is baked, while baflas are steamed and shallow fried. So the dish is – you crush the batti made from coarse wheat and corn flour mixture, add daal to it with copious amounts of ghee, and have the baingan ki sabzi on the side with a squeeze of lemon.

I used to love seeing the wedding food preparations. There were bags of wheat and corn flour, eggplants, and larger-than-life sized containers with equally big blenders. All this was cooked on wood fire. The beauty of this dish is that there are no spices used, except for turmeric, ajwain and jeera. Even the daal does not have tadka, and eggplants are steamed with coriander, green chilies, ginger and garlic to make the sabzi. But at the same time, the kadhi is light and full of whole spices, which provides a refreshing break from the heavy main course and its subtle flavor.

The lunch arrangement was simple. Guests sat in rows with banana leaves in front of them, and they would be served by the hosts, who were usually the bride’s side. I used to love serving! Being an eight-year-old kid, I wasn’t given the heavier containers, so I usually tagged along with the adult serving the daal, with a small container of ghee. The amount of ghee that went on top of the daal was astonishing. But it tasted bloody brilliant.

When I sat for lunch, and since I was among the youngest kids, my aunts lovingly insisted on crushing the battis for me on my banana leaf. And once the daal arrived, I waged war on my stomach. I can say with great amount of certainty that I’ve never had heavier lunches.

Of course, this dish also found way into our kitchen at home. We have been careful enough to make this only on Sundays, so all of us can afford to slip into the inevitable slumber after that. But every time we make this at home, I am taken back to the village weddings.

We now serve varan batti ani vangyachi bhaaji paired with a refreshing, citric wine as a regular feature on our culinary tour in Nashik. Many choose to learn it and try it back home!

Rahul Patil is the co-founder of Wandering Foodie, which organises culinary tours around the Khandeshi region among other destinations.